It wasn’t supposed to be a dramatic scene. For a movie depicting gun smuggling at the U.S. border with Mexico, this sequence simply was to show a bandit’s daughter crossing the Rio Grande on horseback.

On a bank of a shallow section of the Arkansas River in Cañon City, Colo., which was subbing for the Rio Grande, Owen Carter manned a camera for “Across the Border,” an ambitious production of the Colorado Motion Picture Co. Wearing a cowgirl’s outfit and boots, Grace Forman – known professionally as Grace McHugh – rode into the river that shortly would take her life. Carter lost his own trying to save hers.

Rumors of a publicity ruse initially marred some of the early details about Carter’s heroic rescue attempt on July 1, 1914, perhaps because several days passed before anyone located their bodies, apart, far downstream. Crew members themselves later explained they couldn’t quite comprehend how both Forman, 24, and Carter, 29, struggled in water that appeared to be no deeper than their waists, but they marveled at Carter’s effort.

In particular, director Otis B. Thayer insisted that Carter swam out to help McHugh “of his own free will and without any suggestion from myself or anyone else.”

“I am free to say that I never saw greater heroism displayed by anyone than was displayed by Mr. Carter in this instance,” Thayer wrote to the Hero Fund one month after the incident. “He was taking his life in his hands in attempting to go across the swift current of the river, and it certainly looked to me when I saw him last that he would succeed in making the rescue, but unfortunately he lost his life in his effort.”

The deaths were a stunning turn, especially given that the scene was being re-filmed because the previous version was damaged in the development process, according to author Michael J. Spencer’s book Hollywood of the Rockies: Colorado, The West and America’s Film Pioneers. “Across the Border” was the first film for Forman, who was 5 feet, 3 inches tall and weighed about 115 pounds.

Per accounts witnesses later provided to the Hero Fund, Forman rode into the river at a point where it was about 125 feet wide and about 3.5 feet deep. She was about 30 feet out when the horse stumbled and she fell into the water. An actor on horseback rode into the river to her and she grasped his hand, but they separated and she drifted downstream.

Carter, who previously worked as a harness maker, was considered a good swimmer and was about 8 inches taller and 50 pounds heavier than Forman. He entered the river and swam about 320 feet to Forman. Soon, they disappeared and drowned. Carter’s body was found five days later, more than a mile from the scene, while Forman’s body was missing until 12 days later, 9 miles from the scene, according to movie company officials. 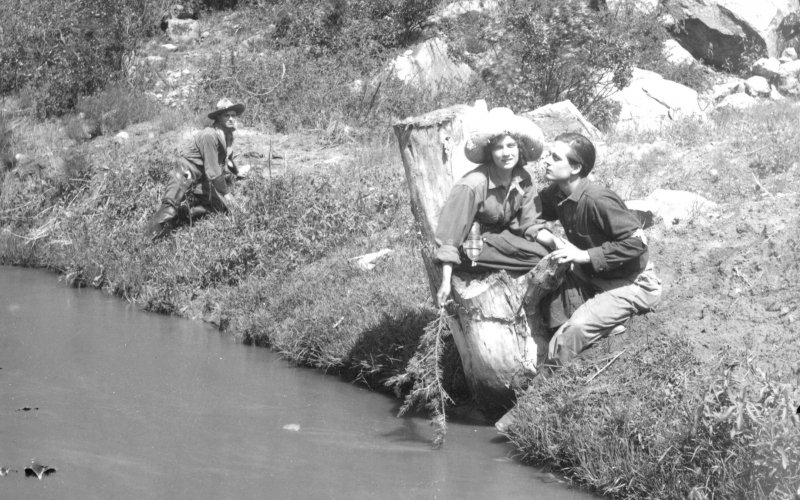 Grace Forman, known professionally as Grace McHugh, acts in a scene along the Arkansas River, which was substituting for the Rio Grande during the filming of “Across the Border” in 1914. Carter (not pictured) drowned in the river attempting to save Forman, who also died. Photo courtesy of the Denver Public Library.

Although the Cañon City Record published a story the day after the incident that summarized the accident similarly to the Hero Fund’s investigation, some news accounts spread speculation of a marketing stunt. In one instance, also on the day after, a Colorado paper 125 miles away reported: “Rumors today were heard to the effect that the entire affair was a press agent scheme cleverly worked up, but no confirmation of this report could be found.” Even the national trade-industry outlet Billboard – then known as The Billboard – chose in its July 11, 1914, issue to frame the circumstances as “mysterious.”

Despite the deaths, showings of the film went on. In fact, in August 1914, newspapers were reporting that the movie company was releasing the film early. Articles and advertisements – sometimes distastefully – emphasized the exciting drama of the film and the history of Forman’s death while downplaying or even failing to mention Carter. “The greatest of Mexican War features in which Miss Grace McHugh the beautiful and daring leading lady lost her life,” stated an ad in the Perth (N.J.) Amboy Evening News.

One of the stranger items was in The Brooklyn Daily Eagle on Aug. 28, 1914. In an article, it contended that no motion picture to date likely had a more tragic production history. The paper referenced Carter’s heroism in passing – without naming him – and it discussed the filmed death of an animal.

“A valuable pony lost its footing and fell over the cliff during one of the scenes and was killed,” the paper reported. “It was only after being convinced that it was an accident that the board of censorship permitted this scene to remain in the picture.”

But Carter’s sacrifice was not completely overshadowed by the deaths of an actress and a pony. A Cañon City woman, “Mrs. A.W. Lloyd,” wrote a poem that the Hero Fund maintains in its archive of Carter’s act.

Into the swift current, so fearless and brave
In merciful kindness he plunged to his grave,
With quick, noble impulse at duty’s first call,
Life’s joys and its pleasures he yielded them all,
And thus entered into a spiritual life
Away from earth’s conflict, its worry and strife.
Though his heart-broken wife in sorrow may grieve,
This beautiful truth she must always believe,
That in grand endeavor he has reached the goal
Of a purified life, a glorified soul.

While newspapers instantly credited Carter in July 1914, ultimate recognition by the Hero Fund was delayed until January 1920 as the organization worked to collect additional information from Thayer as he traveled throughout the country.

By then, Carter’s wife had remarried and the Commission awarded his posthumous medal to his mother, Celina Shannon, who responded with a handwritten letter.

15:13 calls to mind those in the Hero Fund’s 117-year history whose lives were sacrificed in the performance of their heroic acts. The name identifies the chapter and verse of the Gospel of John that appears on every medal: “Greater love hath no man than this that a man lay down his life for his friends.” Of the 10,153 medal awardees to date, 2,063, or 20 percent of the total, were recognized posthumously. They are not forgotten.