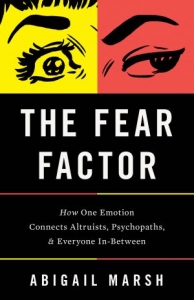 Abigail Marsh, an associate professor of psychology and neuroscience at Georgetown University, has written a galvanizing account of her research into the neurobiology of altruism. Galvanizing? Well, certainly to those interested in Carnegie heroes, but beyond that to anyone interested in how our brains work.

Marsh’s book, The Fear Factor, tells the story so engagingly that describing her conclusions should require a “spoiler alert.”  Research by Marsh and her coworkers provides startling insight into the way a particular brain structure influences altruistic behavior. Yet these findings raise a disturbing question for the Hero Fund: Is the Carnegie Hero Medal just an award for a particular brain anatomy? If that were the case, it certainly might change the way we look at what we are doing.

Marsh’s journey to the study of altruism was both personal and intellectual. As a young woman, she herself benefited from a dramatic rescue that, at the least, would have merited consideration for a Carnegie Medal. The peril she faced, and the stranger who helped her, left a lasting emotional impression.

Marsh’s intellectual journey was more complicated, but equally interesting. Her Harvard postdoctoral thesis, based on her own research, revealed that a person’s altruism was reliably predicted by that person’s ability to recognize fearful facial expressions in others. She found this result “weird,” and indeed two prominent psychologists noted it as one of the “most unintuitive” psychology findings of 2007.

Armed with her doctoral degree, Marsh began work at the National Institute of Mental Health as a postdoc assistant to James Blair, a prominent researcher in psychopathy. This might seem an odd turn away from Marsh’s research into altruism, but it proved serendipitous. Marsh screened young people for early signs of potential psychopathy. Those who were willing underwent a functional MRI, or “fMRI,” which is a specialized brain scan. An fMRI can’t tell what a subject is thinking, but it can reveal how active various parts of the brain are during a particular mental activity. These scans were compared to a control group who had more normal scores on the psychopathy screening test. When the control group viewed human faces showing fear, their right amygdala “lit up,” showing high activity. The amygdalae (there are two) are small structures, roughly the size and shape of an almond, deep in the brain.  When children who displayed high risk for psychopathy viewed the same human faces showing fear, the right amygdala show no activity. This was what the researchers were looking for.

Marsh’s next step was inspired. As she looked at a graph showing the activation of each subject’s amygdala, she saw that it looked like a normal “bell curve distribution” sawed in half. Most people clustered around a normal response to fearful faces, but the curve declined as fewer and fewer subjects showed lower and lower activation of the right amygdala. Out at the end of the curve were a tiny number of potential psychopaths who showed no response at all. When Marsh looked at the sawed-off bell curve, she wondered if there might be a population of people who made up the missing half of the bell. Could they be the altruists she had studied in her postdoctoral research?

To find out, Marsh set out to create a study of the purest altruists she could find. She initially considered a Carnegie Medal awardee, but quickly focused on individuals who donated kidneys to complete strangers. Rules around research on human subjects made the kidney donors more feasible. Marsh clearly enjoyed dealing with these remarkable people, and her description of their participation in the study alone makes her book worth reading. But the research results were even better: these altruists (and their control group) did indeed make up the population on the missing half of the bell curve. When they were shown fearful human faces, their right amygdalae “lit up” even more brightly than the controls. These kidney donors made up the missing tail of the bell curve, on the opposite side from the psychopaths.

This critical finding was really just the point of departure for Marsh and other researchers. Good science required, for example, that she explore other possible explanations for the data, and rule them out if possible. These are not minor details, because some of this work bears on the question raised earlier in this essay: Is the Carnegie Medal just an award for a particular brain anatomy? For today at least, I will invoke the “no spoiler” rule. (I hope I don’t give too much away if I tell you we will still be awarding the Carnegie Medal!) If you are interested in heroism and altruistic behavior, read the book. Later, in another issue of imPULSE, we can gather again to discuss that issue. With luck, our understanding will be enriched by further research Marsh is planning with a group of Carnegie Medal awardees we are helping bring together. In the meantime, reading The Fear Factor will prove to be its own reward.