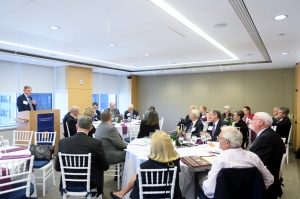 Representatives from seven of the hero funds established by Andrew Carnegie more than a century ago met Oct. 2, 2017 in New York. Nine of the 11 original funds are still in existence and are part of the Carnegie Hero Funds World Committee, created to allow greater communication and cooperation among the funds.

The latest gathering was hosted by Carnegie Corporation of New York, piggybacking the biennial awarding of the Carnegie Medal of Philanthropy.

The meeting was led jointly by U.S. chair Mark Laskow and U.K. delegate William Thomson, who serve as co-chairs of the World Committee. Thomson is one of the great-grandchildren of Andrew and Louise Carnegie.

Funds represented at the meeting were those of Switzerland, Sweden, Belgium, the Netherlands, Italy, the U.K., and the U.S.

Representatives from each fund present reported on the latest news from their commissions.

As a group, a 2018 event in The Hague was discussed, possibly to be centered on the Peace Palace, followed by the Dutch’s World Hero Day. The group intends to continue to keep communication lines open with all nine funds, incuding Norway and Denmark, which were not represented at the meeting.