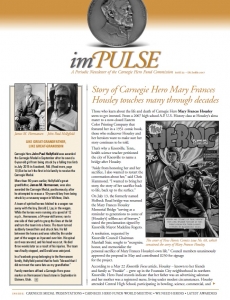 The December 2017 edition of imPULSE, the Commission’s quarterly newsletter, can be read online. This issue includes resumes of the latest awardees’ heroic acts, as well as updates on several awardees and their legacies. Two towns came together to honor their heroes — representatives of Knoxville, Tenn., led by a local teacher recently named a bridge after Mary Frances Housley and folks from the Aquashicola (Pa.) Volunteer Fire Company and Palmerton Area Historical Society requested a grave marker for the headstone of John N. Miller and planned a memorial ceremony to unveil it. In addition, Carnegie Hero Charles S. Harris recently released his third book and Earl Francis Higgins continues to be remembered by his fiancée, Nancy J. Rig, who became involved in a swiftwater rescue organization after Higgins drowned while aiding a boy who fell into the Los Angeles River.

Also included in this edition is coverage of the Commission’s recent medal presentations including:

Other features include updates on the Medal of Philanthropy and a meeting of the  Carnegie Hero World Funds, as well as an essay written by the granddaughter of Carnegie Hero Joseph D’Amato and on the necessity of heroes in our society.