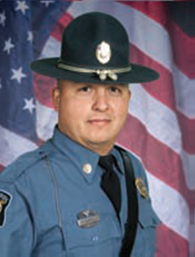 Off-duty state trooper Raul Carrillo responded to a Feb. 21, 2018, interstate highway accident in which a tractor-trailer hauling 7,500 gallons of diesel fuel overturned and caught fire near El Dorado, Kan. The driver, 55-year-old Kenny J. Cantrall was pinned inside the truck’s passenger compartment. Despite flames spreading to the interior of the cab, Carrillo, 46, of Derby, Kan., entered the cab to his waist through an opening where the windshield had been and pulled on Cantrall’s belt until he freed his upper body from between the front seats. With difficulty, Carrillo continued to pull on Cantrall, ultimately freeing his pinned legs from beneath the steering column. As Cantrall came free, they both fell to the pavement. Carrillo guided Cantrell farther from the truck, moments before fire engulfed the cab. Cantrall suffered severe burns and serious injuries. Carrillo suffered burns to his hands, and he recovered.