Raul Carrillo rescued Kenny J. Cantrall from burning, El Dorado, Kansas, February 21, 2018. Cantrall, 55, was driving a tractor-trailer hauling 7,500 gallons of diesel fuel on an interstate highway when the truck struck a concrete barrier wall that divided the highway and overturned, coming to rest on its driver’s side atop the wall. Its fuel tank ruptured upon impact and burst into flame while the overturned tanker leaked fuel onto the highway. Cantrall remained in the cab, his upper body pinned between the front seats and legs pinned beneath the steering column. Carrillo, 46, on-duty state trooper, was traveling in his police vehicle on the same highway in the opposite direction. Debris from the accident, which occurred in front of him, struck his vehicle. Carrillo quickly stopped nearby and responded to the tractor’s wrecked cab where he heard Cantrall’s screams for help. Despite flame spreading into the cab, Carrillo extended his upper body into an opening where the windshield had been, grasped Cantrall’s belt and pulled several times until his upper body came free. With Cantrell’s legs still trapped beneath the steering column, Carrillo continued to pull on Cantrall’s belt and was ultimately successful in freeing his legs. Carrillo backed away from the opening pulling Cantrall free of the burning cab, and they both fell to the pavement. With others, Carrillo aided Cantrall farther from the vehicle to safety moments before flame engulfed the cab. Cantrall suffered severe burns and serious injuries that he sustained in the accident. Carrillo suffered burns to his hands, and he recovered. 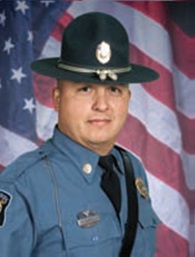