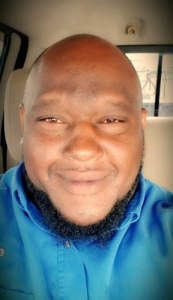 A water meter reader, Andrea L. Harris, 33, of Tuscaloosa, Ala., entered an overturned and burning car to save 7-month-old Demarcus T. Richardson on July 27, 2018, in Coker, Ala. The car, being driven by Demarcus’s mother, traveled off a rural highway, 50 feet down a grassy embankment, and overturned onto its roof. Fire issued from the car’s undercarriage near the engine. Demarcus’s mother exited the car and went to the highway for help, where she flagged down Harris. He ran to the car, and, after failing to open the passenger-side door, laid on his stomach at the rear, passenger-side door and broke its window with his hand. He crawled through the window into the smoke-filled car and felt for Demarcus. Locating him lying inside on the car’s roof, Harris grasped Demarcus’s leg and dragged him from the car. Flames grew and spread as Harris carried the boy to the highway.