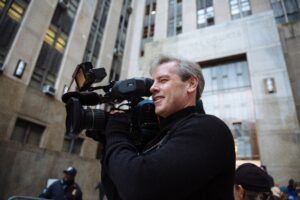 Kelli A. Daley, 54, was standing on a subway platform in New York City, on May 19, 2021, waiting for a train home when a 22-year-old man with a knife ambushed her from behind and repeatedly stabbed her, even after she fell to the ground. Another subway rider, 52-year-old cameraman Sean P. Conaboy, of Brooklyn, New York, shoved the assailant to the ground, briefly separating them as Conaboy also fell. The assailant returned to his attack on Daley. Conaboy regained his footing, wrapped his arm around the assailant’s neck and pulled him off of Daley, as the assailant continued to attempt to stab Daley. Conaboy pinned the assailant to the floor. Police responded and arrested the assailant. Daley was taken to a hospital where she was treated for wounds to her neck, shoulder, and chest.