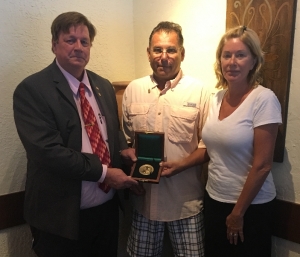 Volunteer presenter Ralph Cash Kaschai, left, presented Carnegie Hero Thomas Julius Sais, Jr., center, the Carnegie Medal during a private presentation held July 5, 2018, in Melbourne, Fla. Sais’s wife Donna, right, is pictured with the men. Sais, of Palm Bay, Fla., was awarded the medal in March 2018 after helping remove a 60-year-old man from a burning sport-utility vehicle that had left a highway, descended a steep embankment and overturned in an area with dense vegetation. Sais, then 62, descended the embankment, broke out glass from the car’s rear windshield and climbed fully inside. He released the driver from his seat belt and, with difficulty, began to pull the man toward the rear windshield. A police sergeant arrived to help and together they removed him from the rear of the vehicle as flames spread in the interior of the passenger compartment. Kaschai, who was awarded the Carnegie Medal in 1978, after he helped to rescue two men from a burning sedan in Orlando, said that both Sais and his wife are “great people and an asset to the Carnegie (Hero) family.”