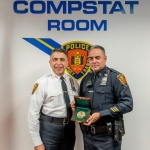 On Aug. 26, 2016, Ortiz, who was on-duty, responded to a despondent man at a train station in Secaucus, N.J. The man was at a point between the rails of a track at a commuter train station as an express train traveling at 60 m.p.h. approached the station on the track.

Ortiz advanced to the man who was lying face down on the track, grasping its rails. Ortiz handcuffed one of the man’s hands and pulled it from the rail, but the man, who greatly outweighed Ortiz, resisted Ortiz’s attempts to remove him from the track.

Seeing the train approach, Ortiz stepped between the rails of the track, but the man continued to struggle against him. Ortiz tugged hard on the man as the train, then in emergency braking, bore down on them. He dragged the man from the track just seconds before the front of the train passed them.

“Officer Ortiz’s heroic effort, which was captured on video and circulated around the world led to numerous awards. His final and most prestigious award was … the national Carnegie Medal,” the police department published after the ceremony.

The ceremony was also attended by Ortiz’s family.