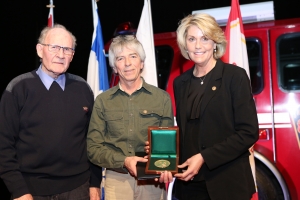 Carnegie Hero René Roy, center, poses with Robert Mercier, left, and Commission board member Nathalie Lemieux, right, after being awarded the Carnegie Medal during a special ceremony on May 12, 2018, at the Sherbrooke Fire Department in Sherbrooke, Qué.

In August 2016, Roy, 55, an electro-mechanical technician of Sherbrooke, saved Mercier, 78, from a burning vehicle which had left the road and overturned in Sherbrooke.

Roy approached the car unsure if anyone was still in the vehicle, then observed Mercier’s head and arm emerge through an opening.

He grabbed Mercier’s free arm and pulled, pressing his foot against the car for leverage until Mercier was free, then dragged him to safety.