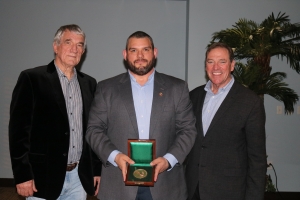 In October 2016, King, 38, a financial planner of Panama City, Fla., saved a 23-year-old man from a burning sport utility vehicle in Panama City.

Its front end aflame, the vehicle came to rest on its passenger side in a culvert. Using his forearm, King struck the driver’s window until it finally broke.

Despite growing flames, he extended his upper body inside the vehicle, grasped the driver under his arms, and dragged him through the opening out of the vehicle.

As King dragged the man to safety, flames grew and spread to engulf the vehicle.

“This is a huge amount of fun for me and an honor to have a chance to recognize someone who has done something really selfless and heroic for a stranger,” said Dunn, who represents Florida’s second district.