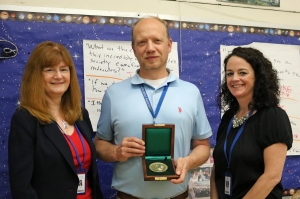 In September 2016, Kalafat, a 46-year-old teacher of Scotch Plains, N.J., saved a 26-year-old woman from drowning at Point Pleasant Beach, N.J. Kalafat entered the water to find the woman face-down and unconscious.

Kalafat grasped her around the waist and fought large waves and unwadable water until ultimately reaching a point of safety. There, others took the woman and began efforts to resuscitate her.

“Out of 325 million Americans, the Commission chose 18 heroes, and your teacher is one of them,” Dolan told Kalafat’s students as they applauded.