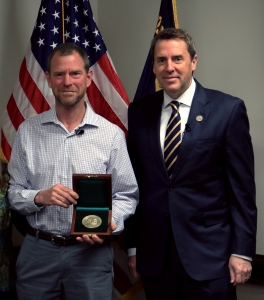 A 9-year-old girl and her sister were caught in a strong current and pulled away from shore.

Both of their parents responded, with the mother reaching the 9-year-old.

Rich swam to the girl, who left her mother, who was struggling, and held to him.

With difficulty, Rich swam the girl nearly back to shore but struggled to reach wadable water. Rich’s wife swam out to assist them, along with others, in reaching the beach safely.

Boaters rescued the girl’s sister and mother from the water and recovered her father, who was unresponsive and could not be revived.

“I was humbled today to present Mark Rich of Randleman the Carnegie Medal — a rare and prestigious award for life-saving heroism,” Walker said. “Because of his sacrifice and courage to do the right thing, this girl has a future. Thank you Mr. Rich for being a hero.”