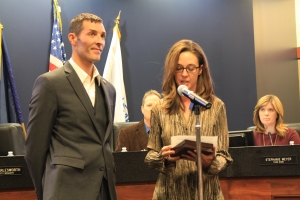 On Sept. 11, 2016, Owe, a 33-year-old construction worker, helped rescue a woman and 8-month-old baby from an assault in a parking lot after two men ambushed the woman at her car after she placed her baby inside. Suffering blows to her head, including from a handgun, she screamed for help.

Owen, of Kansas City, Mo., responded and confronted one assailant, punching and tackling him. The assailant returned to his feet and shot Owen in the face. Owen took him to the ground a second time, and while they were on the ground, the assailant shot Owen twice more in the left forearm and shoulder.

Another bystander fatally shot that assailant; the second assailant fled the scene but was later apprehended.

The woman, who was bloodied, was hospitalized for head injuries, and Owen underwent surgeries to reconstruct his face and to remove the bullet from his shoulder. He recovered in about six months.

In a Feb. 12 tweet, the Shawnee Police Department stated the Carnegie Medal was “an honor befitting [Owen’s] heroism.”

Photo courtesy of the City of Shawnee.