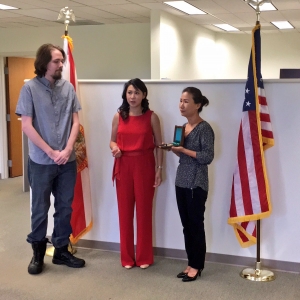 John Andrew Ussery, a 51-year-old cable lineman of Sanford, Fla., died after attempting to save his 25-year-old co-worker from drowning on May 16, 2017 in Palm Beach, Fla. Ussery reached the man in the Atlantic Ocean but could not maintain his hold. After being towed ashore, Ussery fell unconscious on the beach. He was taken to a hospital but could not be revived.

“Humbled to meet the family of John Andrew Ussery to present them with a Carnegie Medal in his honor. John, who lived in Sanford, was a man of incredible courage who sacrificed his own life to save the life of another,” stated Murphy in a tweet after the ceremony. Murphy represents Florida’s seventh district.