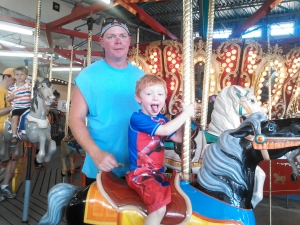 Last fall, Michael J. Manley, Sr., was posthumously awarded the Carnegie Medal for attempting to save his step-son, Andrew Short, from drowning one year earlier.   Manley drowned in the rough surf.  In June, Manley, of Wilmington, Del., was also awarded the prestigious Silver Lifesaving Medal from the U.S. Coast Guard for the same rescue.

Established by an act of Congress in 1874, the Coast Guard medal, given in grades of silver and gold, is one of the oldest in the U.S., with the silver medal having been awarded only about 1,900 times.  It can be awarded to both civilians and military personnel.

According to an article posted on Delmarvanow.com, Pond spoke directly to Short and Manley’s 5-year-old son, Michael Manley, Jr.

“Every day, men and women of this station train to assist anyone in danger out at sea. What your father did is an inspiration to me and my crew,” Pond said.

While vacationing in Virginia Beach, Va., Short was caught by a strong current that took him farthe from shore and kept him from returning. Manley waded and then swam to a point near Short, instructing him on how to return to shore. Short followed Manley’s directions and safely returned to the beach. Manley drowned in the rough conditions.

Manley’s partnerof 10 years, Amy Jo Fosdick, told reporters that Manley was “one hell of a guy.”

The medal’s requires recipients “rescue, or endeavor to rescue, any other person from drowning, shipwreck or other peril of water.”

Carney also issued the Manley family a Certificate of Valor.

“We gather with sadness, but with gratitude and with pride (for) what he did,” Carney said, according to the article. “We are eternally grateful for his service that day.”