Daniel Marvin Wood helped to save Megan J. Barr from drowning, Frankford, Ontario, February 6, 2013. Megan, 13, was trapped inside her family’s compact sport utility vehicle after a nighttime accident in which the vehicle entered the Trent River and, overturned, was carried a distance by the strong current. It lodged against a rock in water about 3.5 feet deep at a point about 13 feet from the bank, which at the scene was a retaining wall. Wood, 43, minister, and his wife were alerted to the accident from nearby. After he and Megan’s father placed a ladder into the river at the wall, Wood’s wife descended it and, despite the air temperature of 13 and the water temperature of 32, entered the river. In the darkness, she waded about 33 feet to the passenger side of the vehicle, which was submerged at its front end. Unsuccessful in opening the front door, she returned to the ladder for a tool to break one of the vehicle’s windows. When she went back to the car, she fell but quickly regained her footing. Although he was recovering from a recent shoulder injury, Wood then descended into the river and waded to the car. Feeling their way along the vehicle in the darkness, he and his wife went to its rear end, finding that its hatch was opened. They called for Megan to move toward them, and she did so. Wood entered the rear of the vehicle, and he and his wife aided Megan from it to a point along its passenger side, where both Megan and his wife fell. As his wife held to the vehicle, unable to move on her own, Wood carried Megan to the ladder and then returned for her. He supported his wife as both waded back to the ladder and ascended it to safety. Megan required hospital treatment for minor injury, and Wood had symptoms of hypothermia and difficulty breathing, for which he later sought treatment. Both recovered. 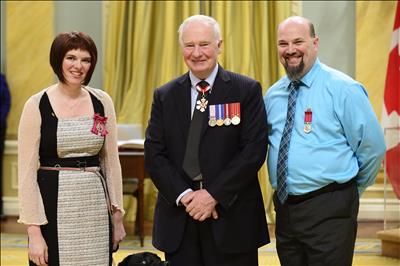