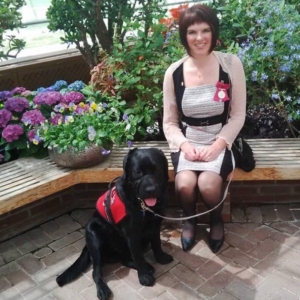 Liane Heather Wood recounted her role in a 2013 river rescue in Ontario for a new documentary series chronicling the positive effect of service animals.  Wood and her service dog, Harley, were profiled in an episode of “Collar of Duty,” which made its debut on the Animal Planet station in Canada in January 2017.

Wood and her husband, Daniel Marvin Wood, banded together on Feb. 6, 2013, to save a 13-year-old girl from a partially submerged vehicle that entered the Trent River at night outside the Frankford, Ont., church where Daniel was the pastor.

After recovering from symptoms of hypothermia, Wood struggled to cope with post-traumatic stress disorder related to the incident, which took place in frigid, fast-moving water.  A nonprofit organization, Dominion Assistance Dogs, matched Wood with Harley, a Labrador retriever, in 2015.

“I was really in a dark place, and was struggling with nightmares, flashbacks and anxieties,” Wood told The Belleville (Ont.) Intelligencer before the show aired.  “Having Harley hasn’t eliminated all of those things, but Harley has made it manageable.  Where I really wasn’t living my life before, Harley has helped me gain back a lot of my life.”

During filming, the Woods spoke about receiving the Carnegie Medal, which the Commission awarded to each in September 2015.  With the assistance of a grant from the Hero Fund, Wood is enrolled in a spiritual psychotherapy training program in Ontario.