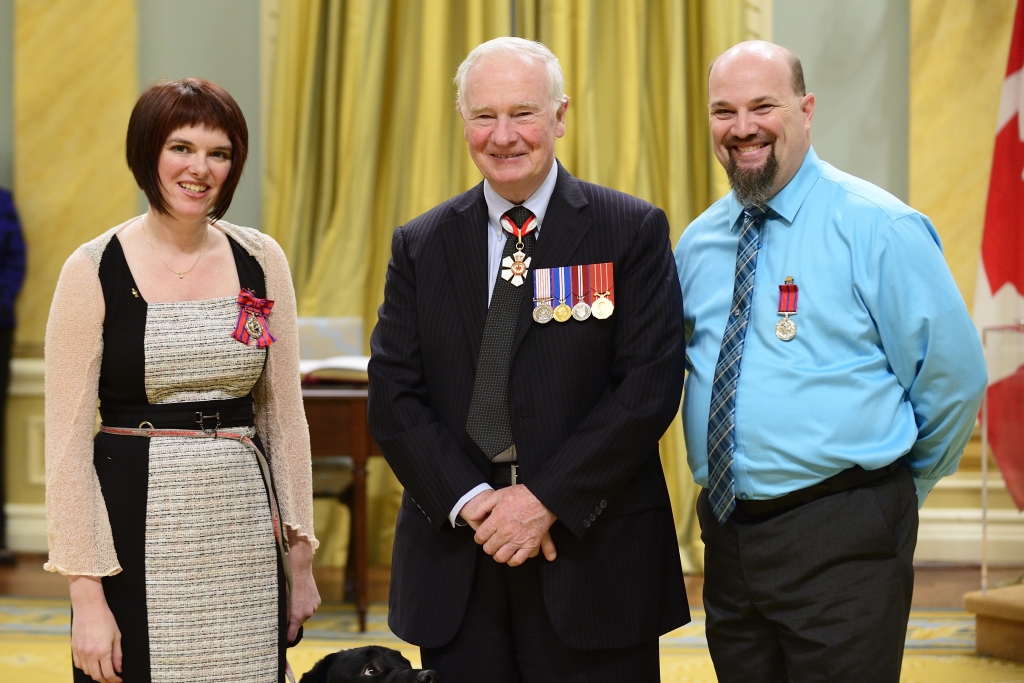 In addition to the Carnegie Medal, Daniel Marvin Wood and his wife Liane Heather Wood each received Canada’s Medal of Bravery in May from His Excellency the Right Honorable David Johnston, Governor General of Canada. Photo by Sgt. Ronald Duchesne, Rideau Hall ©OSGG, 2015.

The couple that saves together, stays together.

For Liane Heather Wood and Daniel Marvin Wood of Frankford, Ont., their marital bond of 25 years went beyond a vow of “for better, for worse.”  In September, they became the latest husband-and-wife team that the Carnegie Hero Fund Commission has recognized for performing an extraordinary act of heroism together.

On the evening of Feb. 6, 2013—a very cold evening at 13 degrees—they joined forces to help Megan J. Barr, 13, escape an overturned sport utility vehicle that was partially submerged in the Trent River in Frankford and get back to her relieved parents.  “We’re honored,” Daniel said upon learning that they were receiving Carnegie Medals.  “It’s very meaningful.”

After hearing a booming crash outside the church where Daniel ministered, the Woods separately waded into the biting 32-degree chill of the fast-moving river to reach Megan.  She was alone inside her family’s vehicle after it broke through a fence atop a retaining wall.  Megan’s parents, who had attended a church program that evening, were inside the building talking with the Woods when the accident happened.  Megan’s mother called 911 while Megan’s father and Daniel placed a ladder into the river.

With her background as a competitive swimmer in high school, Liane, then 42, initially entered the water alone after removing her shoes and jacket.  Daniel, then 43, was a former volunteer firefighter, but his mobility was limited because of a rotator cuff tear about two weeks earlier.  “Without a plan of what I was going to do once I got in the river, all I had was the trust I placed for my life and Megan’s life in God’s hands, and the incredible peace that He was giving me in that moment,” Liane told the Hero Fund in response to her nomination for the medal.

There were a few flood lights in the church’s parking lot, but the vehicle floated downstream into darkness until it struck a rock and stopped moving.  Liane waded through 3.5 feet of water to reach the car.  She tried to open a door, but couldn’t.  She waded back to get a shovel-like tool to try to break a window, but then she fell when trying to establish leverage.

That’s when Daniel decided he had to act, too.  Discarding a protective sling, he climbed down the ladder and waded to Liane.  Rethinking the broken-window plan because of the anticipated difficulty of helping Megan through a submerged window, they moved toward the rear of the vehicle with the hope that the hatch window wasn’t entirely below the water. 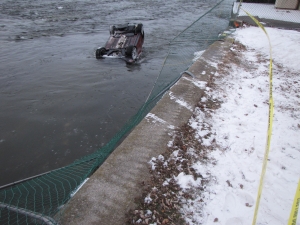 Overturned vehicle in Trent River from which Daniel Marvin and Liane Heather Wood rescued a teenage girl on a cold winter evening in Feb. 2013.

Feeling along the vehicle to the back, they realized that the hatch was open.  From the front compartment, Megan answered their frantic calling of her name with a simple response:  “I’m here.”  Following her rescuers’ voices, Megan dipped her head under water to reach the Woods.  Liane, by then unable to move on her own after the long exposure to the frigid water, held onto the vehicle while Daniel took Megan to the retaining wall.  Megan’s father helped her out of the river while Daniel returned to the vehicle to help Liane wade back.  The rescue concluded before firefighters arrived.

“They were extremely brave,” the fire chief told a newspaper reporter after the incident.  “The current is really fast at that section of the river.  It’s a wonder they were not swept down the river.”

As married recipients of the Carnegie Medal, the Woods join a roster that includes: