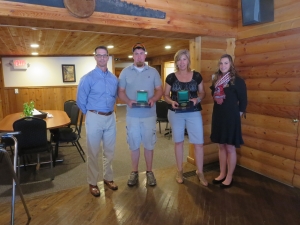 From left, Carnegie Hero Fund President Eric P. Zahren, Carnegie heroes Zachary J. Corey and Karen Marie Mallon, and Taylor Blackmore, from Rep. Jack Bergman’s office, pose after Zahren presented the Carnegie Medal to Corey and Mallon on June 30, 2018, at the Platte River Inn in Honor, Mich. Corey and Mallon, both of Beulah, Mich., were named Carnegie heroes in March for rescuing a 6-year-old girl and newborn from a burning vehicle on Nov. 1, 2016, in Benzonia, Mich. The children were in a vehicle with their mother and older sister, when it struck Corey’s tow truck head-on, traveled off the road, and came to rest in a shallow ditch where it caught fire. Corey, then 27, ran to the passenger side of the vehicle where he saw the 6-year-old in the front, passenger seat. Unable to open the door, Corey grasped the window frame and pulled on it, forcing the door open slightly. He extended his upper body inside the vehicle and removed the girl’s seat belt, then pulled her out. Mallon, then 51, entered through the open, rear, passenger-side door, knelt on the seat and, with difficulty, freed the 13-day-old girl from her car seat. Mallon picked her up and exited the vehicle with her, taking her to safety.The vehicle was shortly engulfed by flames. The girls’ mother and sister did not survive the accident. Mallon said the presentation provided her some closure. “Now when I pass by the site, I think about the lives that were saved,” she said. (See her letter to the Commission on page 5.) Bergman represents Michigan’s first district.