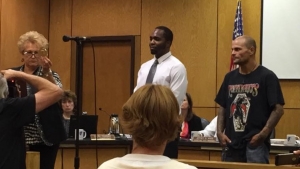 According to news reports, Dempsey’s voice cracked as she presented Anthony Traylor with his brother’s medal. “I’m sorry he lost his life,” she said.

Commissioners and audience members gave both heroes a standing ovation.

In April, 2017, Clinton Township (Mich.) residents Joshua Aaron Traylor, 24, and Elko, 36, entered the Clinton River after a 3-year-old boy fell into the 45-degree water. Traylor attempted to reach the boy, but shortly began to struggle and submerged. Seeing the boy also submerge, Elko jumped into the water, grasped the boy’s shirt, pulled him to the surface, and brought him to a boardwalk where others secured him. Traylor drowned. Photo by Mike Vereeke.