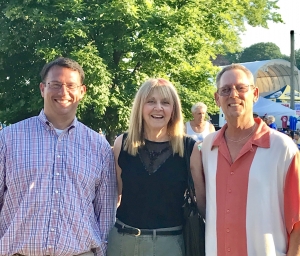 From left, Milford (Conn.) Mayor Ben Blake stands with Diane O’Rourke and husband, Carnegie Hero John Gerard O’Rourke after presenting the Carnegie Medal to O’Rourke for his rescue of a boy from an icy pond on Feb. 5, 2017. The presentation was held at Milford’s Kick Off to Summer fireworks event held June 30, 2018, in downtown Milford. Mayor Blake recounted the Milford resident’s actions for the crowd of hundreds: As O’Rourke, then 61, was walking near a frozen pond, he saw a boy, 10, break through ice while playing with friends. O’Rourke grabbed a large tree branch and moved on his belly to reach the boy, who was about 75 feet from shore, when he also broke through the ice. “I thought I was going to die,” O’Rourke said at the medal presentation, according to a July 1 Milford Mirror article. O’Rourke, who was fully clothed, grasped the boy, held him above water, and attempted to break a path toward shore. As he became nearly exhausted, O’Rourke heaved the boy onto the surrounding ice, which held, then instructed the boy to shimmy across the ice to shore. O’Rourke was unable to hoist himself out of the water even after he moved closer to shore where the water was chest-deep. Police pulled him from the water. O’Rourke and the boy were both treated for exposure to cold water; both recovered. “On instinct, he rushed in to get this child. Ladies and gentlemen, that’s a hero,” Blake said at the presentation, according to news reports. Photo courtesy of Blake.