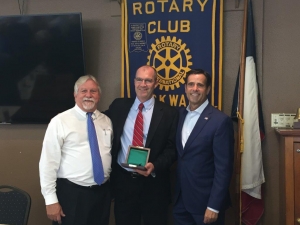 Rockwall (Texas) Mayor Jim Pruitt, left, and U.S. Rep. John Ratcliffe, right, presented Carnegie Hero Frank B. Conselman, center, the Carnegie Medal at a ceremony held at a Rotary Club of Rockwall meeting Aug. 30, 2018. Conselman is a member of the Rotary, and after he saved two men from drowning while on vacation in June 26, 2015, in Pensacola Beach, Fla., he was named a Carnegie hero in December 2017. A Rockwall business owner, Conselman, then 45, became aware that two men who had entered the water to assist a woman and two children were struggling in a rip current that was carrying them away from shore. Conselman put on a flotation belt and obtained a kickboard and swam more than 200 feet to one of the men, by then barely above the surface of the water. Conselman gave the kickboard to the man and then swam another 45 feet to the second man. Hampered by waves and strong winds, Conselman towed him to wadable water, where others assisted the man. A lifeguard swam out to the first man and took him back to the beach. Conselman swallowed water and was nearly exhausted after the rescue; he recovered in two days. Ratcliffe, who represents the fourth district of Texas, posted a picture of the presentation on his Facebook page. “His heroic actions should be an inspiration to us all,” he stated.