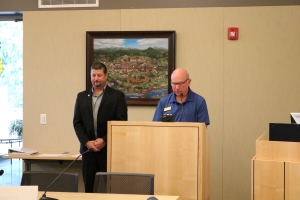 Sequim (Wash.) Mayor Dennis Smith, right, presented the Carnegie Medal to Carnegie Hero Jason Alan Doig, left, at a city council meeting held June 25, 2018, in Sequim. Doig, a cabinet shop owner of Sequim, was awarded the Carnegie Medal in March for saving a woman from falling one year earlier. Doig, then 44, was in a vehicle traveling on a bridge that spanned the Hood Canal when he saw a distraught woman seemingly attempting to commit suicide as she stood atop a railing of the bridge, about 30 feet above a concrete structure and the canal below. Doig exited the vehicle and quickly crossed to the opposite side of the bridge, remaining out of the woman’s view. As another man approached the woman, distracting her, Doig ran a short distance to her and grasped her body as she struck him in the face and leapt backward from the railing. Doig maintained his hold on the woman as she dangled above the structure and struggled with him. The other man also grasped the woman and with the help of a third man, they were able to lift the woman over the railing and back to the deck of the bridge. Doig told the Sequim Gazette that while he appreciates the notoriety, it’s a hard thing for him to accept. “I think I did what a lot of people in this room would have done. It was more of a reaction than a thought-process,” he said at the presentation. Photo courtesy of Barbara Hanna.