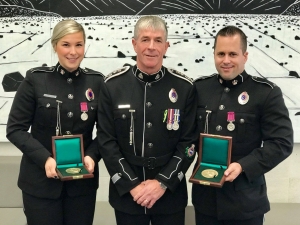 Three years earlier, the two officers entered the Atlantic Ocean off of Flatrock, N.F. , after a distressed woman  intentionally leapt from a remote, rocky shoreline into frigid, deep water. Torres swam to the woman, grasped her from behind, and towed her toward the shoreline. Pelley also grasped her, and as waves broke over them at the shore’s edge, the woman resisted them there. Ultimately Pelley and Torres pulled the woman onto the shore and away from the water.