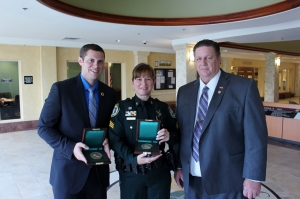 From left, recent Carnegie Medal awardees Robert Sunkel and Linda Nolan with Ralph Cash Kaschai, a volunteer presenter of the Carnegie Medal who is also a Carnegie Hero, awarded in 1978.

In March 2016, Sunkel and Nolan made repeated entries inside a burning car in order to inch the driver from the wreckage and pull her to safety, despite intense heat and flames that had reached the dashboard.

“Deputies Linda Nolan and Robert Sunkel exemplified that love when they rescued Cheryle D. Coons from burning on March 23, 2016,” said Kaschai, referring to Bible verse John 15:13, “Greater love hath no man that this, that a man lay down his life for friends,” which encircles the reverse side of the Carnegie Medal.

Kaschai has been a volunteer presenter for one year, and was awarded the Carnegie Medal after a 1976 act in which he helped to rescue two men from a burning sedan in Orlando, Fla.