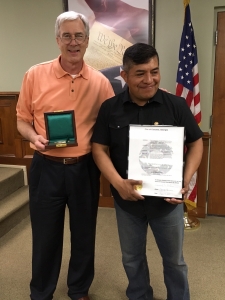 In the city of Conyers, Ga., Mayor Randal S. Mills, left, declared June 7, 2017, Raul Moreno Day.  At a city council meeting held June 7, 2017, Mills presented Moreno with the Carnegie Medal on behalf of the Hero Fund as well as a commendation from the city.

“The City of Conyers and the Carnegie Hero Fund Commission applaud and celebrate the selfless efforts of Raul Moreno,” stated the mayor’s proclamation.

In June 2016, Moreno witnessed an accident in which a dump truck left the roadway and entered a shallow ditch, flames breaking out in the undercarriage of the engine compartment and dense smoke filling the cab.  Moreno ran to the driver’s side of the truck and broke out the window with pruning shears.  He then extended his head and arms through the opening and, holding his breath, bear-hugged the driver and pulling multiple times, inched him from the cab. Read more.