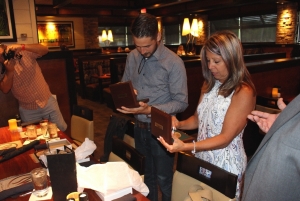 Carnegie Heroes Shane S. Mitchell, left, and Lisa Missana, both of Tampa, Fla., unveil their Carnegie Medals for the first time. Volunteer presenter Ralph Cash Kaschai, of Orlando, Fla., presented them with the medals at a private ceremony held June 29, 2017, in Tampa.

“Welcome to the Carnegie Family,” Kaschai told the recipients.

In March 2016, Mitchell and Missana responded to the scene of an accident in which a car entered a retention pond and submerged in water about 10 feet deep. Reaching the scene first, Mitchell entered the water, swam about 80 feet to the vehicle, and submerged repeatedly, reaching through the open driver’s window to attempt to release the driver’s safety belt.  Missana then came upon the scene and also entered the water and also unsuccessfully attempted to free the driver.  As Missana headed back toward the bank for a cutting tool, Mitchell was able to release the driver’s safety belt, and Missana returned. Together they dove again to the car and removed the driver, swimming her to the bank.

Kaschai said the presentation and discussion that followed was enlightening.

Kaschai was awarded the Carnegie Medal in 1978, after he helped to rescue two men from a burning sedan in Orlando. Read more.