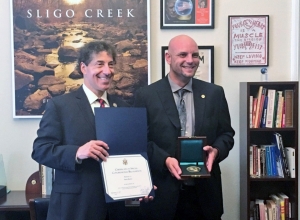 In July 2016, Barnes helped save a woman from drowning after a flash flood threatened to wash away the car she was driving. Barnes directed her to pull to the curb, losing his footing in the knee-deep water on the sidewalk and being swept several feet away before regaining his footing and returning to the scene.

Then, he and three other men formed a human chain that extended from the entry of a business toward the car with Barnes at the far end, but Barnes’s reach was 3 feet short. After the woman climbed partially out the passenger window, Barnes released from the chain and waded from the car to lift and carry the woman to the others and to safety.

Raskin, who represents Maryland’s eighth district, presented the medal to Barnes in front of his family and friends.

Raskin later tweeted that he was “honored to meet Jason and his beautiful family.”