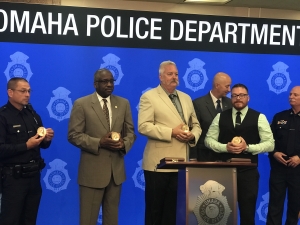 On Aug. 28, 2017 Ricketts, McGee, and a representative from Omaha Mayor Jean Stothert’s office presented the Carnegie Medal to the four men for two separate acts of extraordinary heroism.

“We live in the best place in the world. And the reason Nebraska is the best place in the world is because of our people,” said Ricketts during the presentation held at the Omaha Police Department. “And we also have a spirit of dedication to our fellow citizens, of grit, and of courage. And that is why we are here today. To talk about and honor four men who have demonstrated that spirit of Nebraska, that courage, that grit, in service of their fellow citizen.”

Suffering smoke inhalation injuries, Omaha Police officer Goering-Jensen saved two people from a burning house in December 2015 in Omaha. Despite dense smoke and flames, Goering-Jensen twice entered the home on his hands and knees to remove one man who used a wheelchair and an elderly woman.

In February 2016, neighbors Bailes, Holbeck, and Wilson worked together to remove a man who was trapped in a burning car after an accident in Omaha. Holbeck bent the car’s window frame to access the man, and then, in repeated attempts, all three men pulled on the man until he was free.

“We all have in our minds what we believe a hero is. Who doesn’t know these words: faster than a speeding bullet, more powerful than a locomotive, able to leap tall buildings in a single bound?” said McGee. “While we don’t have Superman here today, we have men here today that have done super things.”