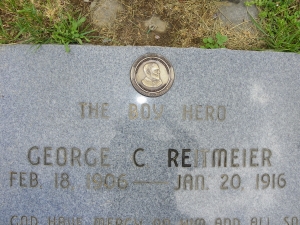 A century after his heroic death, George C. Reitmeier’s story lives on at the gravesite of the boy hero in Cumberland, Md.  George was just 9 when he died Jan. 20, 1916, attempting to save a 15-year-old boy from drowning in the Chesapeake and Ohio Canal in Cumberland.  On the 100th anniversary of his death this year, a small group of George’s extended family still living in Cumberland, including his nephew, John Reitmeier, Sr., and niece, Norma Clark, met at the gravesite with representatives of the Cumberland Historic Cemetery Organization to commemorate the heroic act.

Volunteers for the cemetery group have kept careful watch over George’s grave since 1993, when the organization helped to install a ledger crypt describing his heroism at SS. Peter and Paul Catholic Cemetery.  The epitaph references the posthumous awarding of the Carnegie Medal, which the Hero Fund announced nine months after George died.

George’s great-nephew, John Reitmeier, Jr., of Cumberland said the cemetery group has done well to preserve the ledger crypt over the years.  The original grave marker is so weathered that it’s hard to make out George’s name or the phrase Our Little Hero on a cross.  “It’s very important,” he said.  “We appreciate all their work.  I know it takes money and time for them to maintain it.”

George, whom the Reitmeier family still calls “Georgie,” was one month shy of his 10th birthday when the accident happened.  J. Louis Laber was ice skating on the canal when the ice broke and he fell into water several feet deep.  George, who also was skating, went to the hole and extended a short board toward the boy, according to the Hero Fund’s records.  The ice under George then broke, and he also fell into the water, ultimately drowning.  Others at the scene used a long iron rod to rescue Laber.

Reitmeier Sr., lived with George’s parents as a teenager, and he said he remembered Laber occasionally visiting the family.  “He always sent a Christmas card to my grandmother,” Reitmeier Sr. said of Laber.

At the time of the crypt dedication, Mary Lippold, the last surviving of George’s three siblings, was a member of the cemetery group.  Lippold, who was 7 when George became a hero, died a year after the dedication.

Since the cemetery organization began, volunteers have placed more than 800 monuments at historic and noteworthy gravesites along the East Coast, said group president Edward W. Taylor, Jr.  The group’s affiliation with the SS. Peter and Paul Catholic Cemetery dates back to 1983, when Taylor co-founded the self-funded organization.  “As we live in this world that changes, the monuments are there to tell the great history of the nation,” he said.—Chris Foreman, Case Investigator

15:13 calls to mind those in the Hero Fund’s 112-year history whose lives were sacrificed in the performance of their heroic acts.  The name identifies the chapter and verse of the Gospel of John that appears on every medal:  “Greater love hath no man than this, that a man lay down his life for his friends.”  Of the 9,845 medal awardees to date, 2,015, or 20.5% of the total, were recognized posthumously.  They are not forgotten.