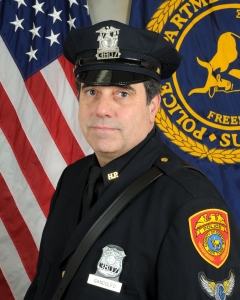 Nineteen-year-old Mercedes C. Ramos was trapped inside a burning sport utility vehicle after an April 20, 2018, accident in which the front of her vehicle struck and became wedged beneath the rear end of a truck in East Patchogue, N.Y. Flames broke out on the vehicle’s hood and then spread to its interior.

Suffolk County Police Officer Richard J. Gandolfo, 55, responded to the scene, but he could not open any of the vehicle’s doors. Passing motorist Robert M. Hosey, 38, construction worker of Coplay, Pa., also responded and, with difficulty, opened the rear, driver’s-side door. Working together, Gandolfo and Hosey maneuvered Ramos into the backseat of the car and then removed her to safety. Another man helped the duo move Ramos away from the burning car, which was shortly engulfed by flames.