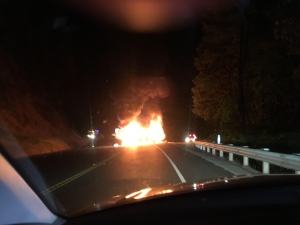 Forty-five-year-old Nicholas Anderson saved five people from burning when he stopped at the scene of a May 26, 2017, accident in Willits, Calif. Six people were inside a pickup truck that collided with an SUV. Fire broke out at the front ends of both vehicles. With another man’s help, Anderson, an operations manager, pried open one of the truck’s rear doors and freed a 7-year-old boy from his seat and removed a 22-month-old girl from her safety seat, handing her off to another person. As Anderson moved around the truck to reach the passenger side, he heard a man, 24, moaning from inside the covered bed. He reached through the cover’s rear window and lifted the injured man through it, lowering him to the road. He then entered twice more to remove two women, 19 and 43, from the truck, as flames licked the front windshield. The fire rapidly spread and engulfed both vehicles; neither driver survived.