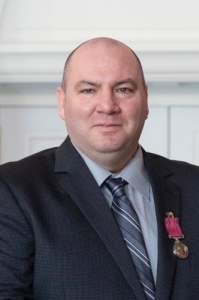 Michael Douglas Barkhouse, of Walton, N.S., saved a kennel attendant, 42, from an attacking dog at a shelter in Yellowknife, N.W.T., on June 17, 2017. Barkhouse, a 44-year-old construction worker, was driving to work when he spotted the woman in a fenced kennel with the dog and heard her screaming. Barkhouse wore leather work gloves and used a wooden stake from his truck to force open an outer latch on the kennel. He entered it and yelled at the dog, striking it with his feet and hands until it released the woman. As the dog retreated, Barkhouse dragged the woman to the kennel’s holding are. He then closed the inner gate to separate the dog from them. The attendant was hospitalized and treated for numerous bites. Barkhouse’s right hand was bruised.