An off-duty campus police sergeant responded to a single-car accident occurring May 1, 2019, in San Antonio. The sedan overturned onto its passenger side and fire broke out in the engine. The car’s driver, 48-year-old Tammy F. Cook, was held in her seat by the seat belt and, disoriented, she could not leave the car. Police Sergeant Kenneth L. Hamilton, 54, used a metal baton to attempt to break out the windshield, but it did not break through. Others nearby threw things at the windshield to weaken it, while Hamilton kicked it several times and then peeled it from its frame to create an opening near the ground. He reached through the opening and used a knife to cut Cook’s seat belt. She tumbled from the driver’s seat and scrambled to her hands and knees. Hamilton reached through the windshield opening, grasped her wrists, and pulled her from the car. He dragged her about 20 feet away and collapsed. Others moved Cook and Hamilton farther from the engulfed wreckage. Cook was not burned and recovered from accident injuries. Hamilton was treated for a strained shoulder as well as cuts and scrapes, but he, too, recovered. 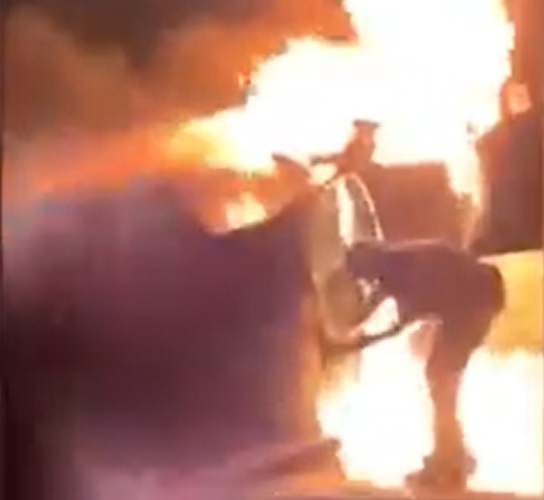 Still image from video shot by Andrew Jazbani, a college student who witnessed the rescue of Tammy F. Cook, 48, from her burning vehicle after it crashed just off a San Antonio street just after 3 a.m. on May 1, 2019. Cook was rescued by Kenneth L. Hamilton, an off-duty officer with the St. Mary’s University (campus) Police Department who spotted her burning vehicle as he was driving home.