Sanford Harling III died attempting to rescue Sanford Harling, Jr., from burning, Norristown, Pennsylvania, February 5, 2016. Sanford Harling, Jr., 58, who required the use of a walker, was on the second floor of his family’s duplex unit after fire broke out in the living room, on the first floor. He alerted family members, including his son, Sanford, 12, student, who then fled the structure, but flames grew to block Harling’s access to the first floor. Indicating to those outside the rear of the house that he was returning for his father, Sanford re-entered the structure through its back door. Harling, meanwhile, went to a second-floor window on the side of the house and dropped from it to the ground, which was grassy there. He sustained significant injury, which required hospitalization. When conditions permitted, firefighters entered the house and found Sanford on the first floor. He had died of smoke inhalation and thermal burns.

Sanford Harling III, 12, died on Feb. 5, 2016, trying to save his father from their burning home in Norristown, Pa. Sanford, who was known as “Man Man,” played football for the Norristown Youth Eagles.

“The willingness that Man Man made in sacrificing himself was based on love that has many who are here today asking the question, ‘What manner of love was it that he would be willing to forgo and negate his own fears in an effort to rescue his dad?'” the Rev. Byron Craig said at the funeral service at Christian Network Outreach United Church of Christ in Norristown.

Outside the church was a Norristown fire truck, adorned with black bunting and a banner emblazoned with photos of Sanford that read, “Our Little Hero.” 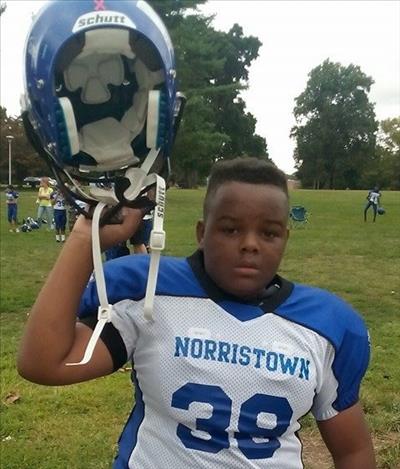