Robert Conant helped to save Daniel Fredericks from falling, Oakville, Ontario, April 18, 2015. Fredericks, 23, slid about 20 feet down the steep wall of a ravine at a provincial park to recover his dog and then became stranded, at a point about 10 feet above the wall’s abrupt drop. He grabbed a branch of a tree protruding from the cliff and held to it with one arm as he secured his dog with the other. Responding to the scene, Conant, 29, on-duty police officer, concluded there was insufficient time to await trained rescuers. He tied one end of a worn rope that was at the scene around his chest as a bystander tied the other end to a tree root. Conant then lowered himself to Fredericks, turning to face the ravine and thereby transferring all of his weight to the rope. Although Fredericks outweighed him, Conant helped him to reposition himself so that he straddled the branch. Backup officers lowered a line to Conant that he used to secure himself further, and firefighters who responded after several minutes employed a series of ropes and a harness to secure and remove Fredericks and his dog to the top of the cliff, about an hour after his ordeal began. Conant was then raised in similar fashion, having spent 30 minutes on the cliff face. Both he and Fredericks sustained minor injury, Conant’s including a bruised chest, and they recovered. 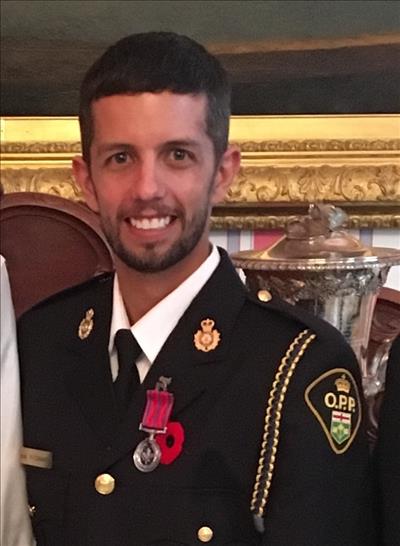