Robbie Goering-Jensen saved Gregory L. and Lula M. Damper from burning, Omaha, Nebraska, December 20, 2015. Gregory, 57, was in a wheelchair in the living room of his family’s one-story house after fire broke out in a bedroom at the far end of the structure, and his mother, Lula, 83, was in a bedroom off a hall near the living room. Goering-Jensen, 49, police officer, was on duty nearby when he saw dense smoke and flames issuing from the eaves of the house. He responded to the scene and learned that the house was occupied. Entering the living room through the front door, he used his flashlight to see Gregory’s wheelchair across the room. Goering-Jensen crawled through dense smoke to the chair, grasped it by a footrest, and pulled it, with Gregory, back to the door, where other responding officers took Gregory to safety. Having heard cries for help from inside the house, Goering-Jensen learned that Lula was in her bedroom. He again entered the structure and, again crawling across the living room through dense smoke, followed Lula’s cries to her room. Entering the room, he stood, lifted Lula from her bed, and retraced his path back to the front door and outside to safety. Gregory and Lula were treated at the scene, but Goering-Jensen was taken by ambulance to the hospital for treatment of smoke inhalation. He recovered. 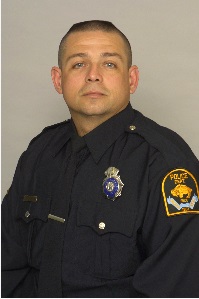