Kenneth L. Hamilton saved Tammy F. Cook from burning, San Antonio, Texas, May 1, 2019. Cook, 48, was trapped inside her car following a highway accident at night during which the car overturned onto its passenger side and caught fire. Cook remained suspended in the driver’s seat by her seat belt, unable to remove herself from the car. Kenneth L. Hamilton, 54, off-duty campus police sergeant, was driving nearby and stopped at the scene as did two college students. Hamilton, seeing Cook inside, used a collapsible metal baton from his equipment belt to strike the front windshield repeatedly but could not break through. The students each had grabbed pieces of broken concrete and threw them against the windshield, weakening it. Hamilton kicked it several times and peeled the cracked windshield from its frame to create an opening. By then, flames extended about 4 feet above the car and had spread to the car’s interior floorboard near Cook’s feet. Hamilton extended his arm through the windshield opening and used a folding knife to cut Cook’s seat belt at the shoulder. Cook fell down to the passenger side of the car and scrambled to her knees as Hamilton reached through the windshield and grasped both of her wrists. Hamilton dragged Cook from the car to a point about 20 feet away from the flames, where he collapsed in a grassy area nearly exhausted. The students then helped move Cook and Hamilton farther away from the burning car. Cook, who was not burned, was treated for a foot laceration and shock at a hospital and recovered. Hamilton was treated for a strained shoulder as well as cuts and scrapes to his right leg. He recovered. 90530-10138 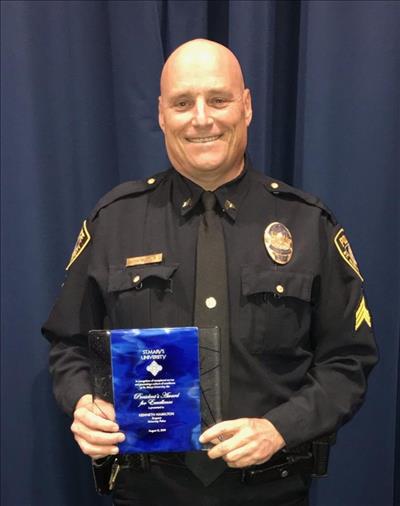