Julie K. Callaghan attempted to rescue Matthew Jarvis from being struck by a train, Chilliwack, British Columbia, May 26, 2018. Jarvis, 40, was in a motorized wheelchair attempting to cross a track at a railroad crossing when its rear wheels became caught in a gap in the pavement. Jarvis was unable to free the wheelchair as a freight train traveling at about 50 m.p.h. approached him on the track. The crossing’s gates descended, warning lights flashed, and bells sounded. Callaghan, 44, vocational counselor, who had stopped her vehicle at the crossing, saw that Jarvis was stuck. She exited her vehicle, darted beneath the gate, then went to Jarvis, where she stood on one side of the wheelchair with her back to the train. Along with another woman, Callaghan grasped the wheelchair twice and unsuccessfully attempted to free it from the track. With the train bearing down, Callaghan looked over her shoulder and began to move from the track. Seconds later the train struck Callaghan’s hand and Jarvis’s wheelchair. Jarvis was killed. Callaghan sustained broken bones and other injuries to her hand, which required surgery, and lacerations and scrapes to her legs. 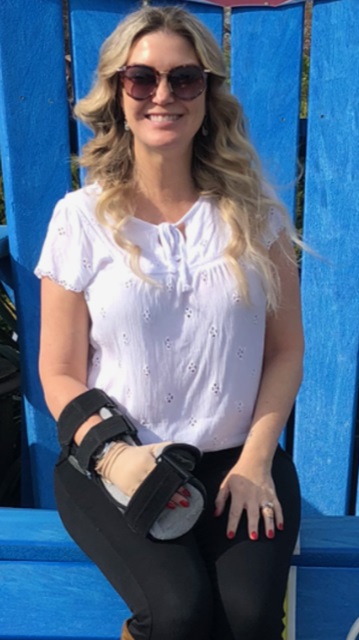