John Andrew Ussery died after attempting to save Jason E. Deleon from drowning, Palm Beach, Florida, May 16, 2017. Deleon, 25, was wading in the Atlantic Ocean near a beach when he was swept into deeper, unwadable water and called for help. A co-worker, Ussery, 51, cable lineman, who was on the beach, entered the water, and swam to Deleon. Ussery grasped Deleon but told him he could not maintain his hold. Ussery and Deleon separated and drifted farther apart and away from shore amid rough surf. Responding police officers swam out to Deleon and Ussery, who were then about 200 feet from shore, with flotation devices, followed by firefighters who paddled out with rescue boards. Officers secured Deleon and Ussery and towed them to the firefighters, who brought them ashore atop the rescue boards. Deleon recovered after hospitalization. Ussery fell unconscious on the beach. He was taken to a hospital but could not be revived. 89171-10009

John Andrew Ussery, 51 of Sanford, Fla., died on May 16, 2017. Ussery died giving his life to save the life of a co-worker, who was swept to sea by a rip current at Clarke Avenue Beach in West Palm Beach, Fla. According to bystanders, Ussery, upon hearing the cries of help, immediately without any hesitation ran into the surf and swam to the aide of his friend. When rescuers were finally able to reach Ussery, he said, “Thank goodness you made it; I didn’t have any strength left.”

Ussery was born on April 4, 1966, in Rockledge, Fla., moving with his family to California. His family moved back to Florida, living for a short time in Orlando and eventually moving to Jacksonville, where they lived until the death of his father, Billy F. Ussery. At that point, his mother, Nadine Ussery Welsh, decided they would be happier if they were to return to their home in Rockledge. Eventually, his mother remarried, and the family all moved to Orlando, and, finally, to Sanford, where Ussery lived with his wife, Jung Hwa Choi, and son, Gabriel N. Ussery. 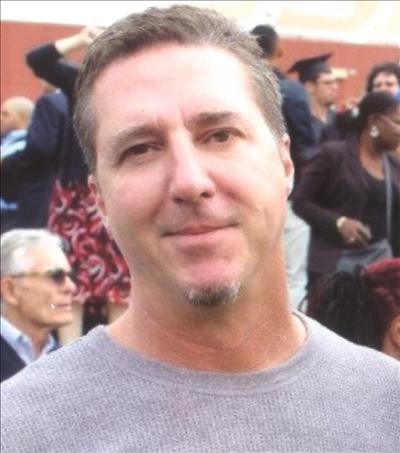