Connor M. Bystrom rescued Charles J. Wickersham from a shark attack, Anna Maria, Florida, September 24, 2011. Wickersham, 21, was spear fishing in the Gulf of Mexico with friends, including Bystrom, 22, surgical veterinarian technician. Their boat was anchored in water about 38 feet deep at a point about six miles from shore. Wickersham was in the water, at the surface, about 25 feet from the boat when a shark bit him deeply on his left thigh; the shark was thought to be a nine-foot-long bull shark. Wickersham struck it on the nose with both fists, and it released him. Bleeding profusely, he shouted to the others that he had been attacked by a shark. Bystrom jumped into the water and swam to him. He grabbed Wickersham by an arm and, swimming, towed him to the boat, where the other men in the party pulled him aboard. Bystrom climbed aboard and with the others tended to Wickersham as they sped to a marina. Airlifted to the hospital, where he was detained six days, Wickersham required surgery, including significant suturing, to close his wound. He recovered in three months. 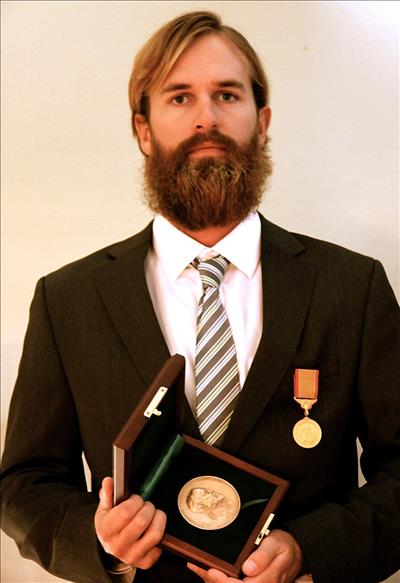