Christopher Jon Ihle saved Marion A. and Jean M. Papich from being struck by a train, Ames, Iowa, July 31, 2013. Marion, 84, and his wife, 78, remained in a car that stalled on a railroad track at a crossing. The crossing’s gates, lights, and bells were activated, indicating the approach of a train. Ihle, 38, banker, was in a parking lot near the scene. Having seen the car on the track, he immediately ran to it when he realized that the train was approaching. With the train then about 450 feet away, Ihle pushed on the rear of the car but, having insufficient traction on the paved crossing, could not move it. He then ran around to the front of the vehicle, which was directly atop the track, and, with the train about 300 feet away, pushed it backward, off the track. Ihle moved to the driver’s side of the car just seconds before the front of the train passed, within a few feet. The front of the train reached a point well beyond the crossing before the train stopped. 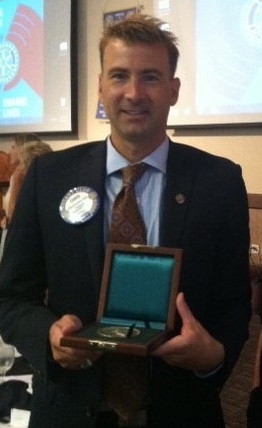