Brian Wargo rescued McKenzie N. Clark from an attacking shark, Kapa’au, Hawaii, October 31, 2014. Clark, 34, was surfing in the Pacific Ocean about 450 feet from shore when a shark, about 12 feet long and later determined by authorities to be a tiger shark, bit her left hand and that part of the surfboard to which she was holding. She freed her hand from the shark, falling into the water, but the shark kept its bite on the board, taking it a short distance and towing Clark, who remained tethered to the board by an ankle. Clark’s friend, Wargo, 45, fisherman, was surfing nearby and saw the attack. As he paddled his surfboard toward Clark and was closing in on her, Wargo saw the shark swimming alongside him. He yelled to Clark to get back on her board and then grabbed the shark’s dorsal fin with both hands to stop the shark. Pulled off his board, which then came between him and the shark, Wargo kicked and punched the shark repeatedly until it turned and swam away. Clark and Wargo returned to shore atop their boards. Clark required hospital treatment, including suturing, for injuries to two fingers. Wargo recovered from soreness. 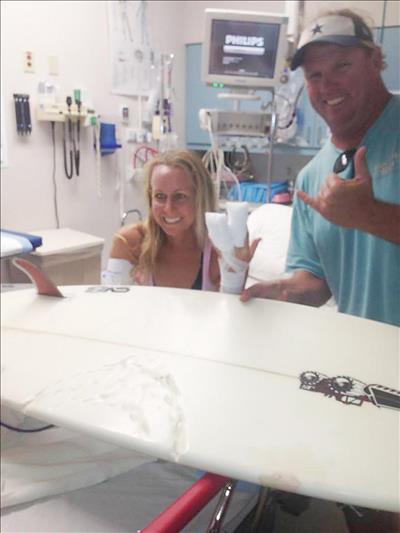