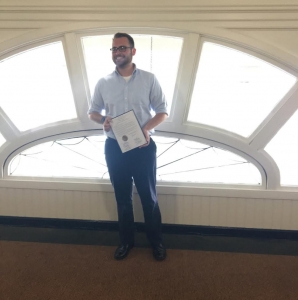 Garcia, 18, was at work inside a drug store when a 41-year-old man, armed with a butcher knife, approached her and stabbed her multiple times. She screamed and fell to the floor, while the assailant continued to stab her. Connor N. Devine, 19, shift supervisor of Warwick, was behind the front, checkout counter when he heard Garcia’s screams and hurried to investigate.

As Devine and others made efforts to attend a badly injured Garcia, a store customer pinned the assailant to the floor. Police arrived shortly and arrested the assailant. Garcia, who suffered multiple stab wounds, was hospitalized.