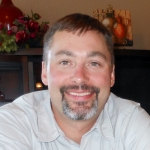 County tax assessor Christopher Schafer, 42, helped save 16-year-old farmer Colt J. Brink from a burning semi-truck after an Aug. 17, 2017, accident in Blunt, S.D. Colt was semi-conscious and partly buried by wheat grain inside the cab of the tractor-trailer after it collided with a train at a crossing. Flames broke out in the truck’s engine compartment, in the spilled grain, and among leaking diesel fuel from the truck. Schafer was driving nearby when he came upon the accident and went to the truck. He briefly fought flames with a fire extinguisher, but unable to squelch the flames, he then pulled on the driver’s door of the cab. Another person joined him, and together they forced the door open. With flames issuing from the undercarriage threatening to breach the truck’s fuel tanks, Schafer and another man extended themselves into the cab and grasped Colt under the arms. They pulled him from the cab moments before the cab was fully engulfed in flames. Colt was hospitalized two weeks with injuries sustained in the accident, but he was not burned. He recovered.