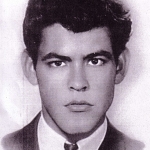 As the residents of Kansas City, Mo., absorbed the news that a young man had been shot protecting his pregnant teacher, a billboard went up: “Primitivo Garcia did not hesitate.  Join the fund at The Peoples Bank.”  Only nine months after the shipping clerk nicknamed “Tivo” arrived from Mexico, Garcia’s heroism on Nov. 15, 1967, roused his adopted community to demonstrate its appreciation while he remained hospitalized, fighting for his life.

That night, Garcia, 24, was leaving a class to improve his limited English skills when he realized five adolescents were harassing and assaulting his 25-year-old teacher, Margaret R. Kindermann, outside a school.  Reverting to his native Spanish, he approached and yelled for them to leave her alone.

Garcia, who stood about 5 feet 7 inches and weighed 150 pounds, managed to pull one of the teens away so Kindermann could flee to safety.  But as Garcia backed away from the attackers, one of them shot him with a pistol.

One public appeal for blood donors spurred two dozen people to go to the hospital.  Meanwhile, the bank-administered fund quickly swelled to about $15,000.  Informed of the donations – both of money and blood – Garcia reportedly told his Catholic priest, “I am grateful.  How can I repay?”

Garcia would not have the opportunity, as he died 13 days after the rescue.  His valor touched then-Gov. Warren Hearnes, who made him an honorary citizen of Missouri and sent a letter to Garcia’s mother, Gregoria, who was among the relatives who accompanied him to Kansas City.

“I hope that any Missourian who has taken his citizenship in a great state and a free nation for granted will now strive to meet the example set by your son,” Hearnes wrote.

The local teachers’ union adopted a resolution stating that all of the city’s teachers owed a “monumental debt” to Garcia.  “When he went to the aid of teacher Margaret Kindermann, he unknowingly committed himself to a destiny far greater than that available to most mortal men,” the resolution stated.

The goodwill spread beyond Missouri, as Time magazine and other media reported admiringly about Garcia’s sacrifice.  In Pittsburgh, the Hero Fund received Garcia’s nomination for the Carnegie Medal from a Missouri woman whose son had been recognized for responding to an assault five years earlier.

“Since someone was kind enough to inform the Commission of my son’s actions several years ago, I cannot pass by this opportunity to do the same for another,” she wrote.

After an investigation, the Commission posthumously cited Garcia in August 1968, and then provided monthly financial assistance to his mother to help with living expenses until she died in February 1992.  In 1993, an elementary school named for Garcia will be the setting for a 50th-year memorial gathering on Nov. 25, 2017.

One of Garcia’s siblings, Irene Garcia Mendez, said Kindermann and her family are among those who are planning to attend.  Mendez proudly mentioned that the baby that Kindermann was carrying a half-century ago became a mother with a son.

15:13 calls to mind those in the Hero Fund’s 113-year history whose lives were sacrificed in the performance of their heroic acts.  The name identifies the chapter and verse of the Gospel of John that appears on every medal:  “Greater love hath no man than this, that a man lay down his life for his friends.”  Of the 9,953 medal awardees to date, 2,031, or 20 percent of the total, were recognized posthumously.  They are not forgotten.