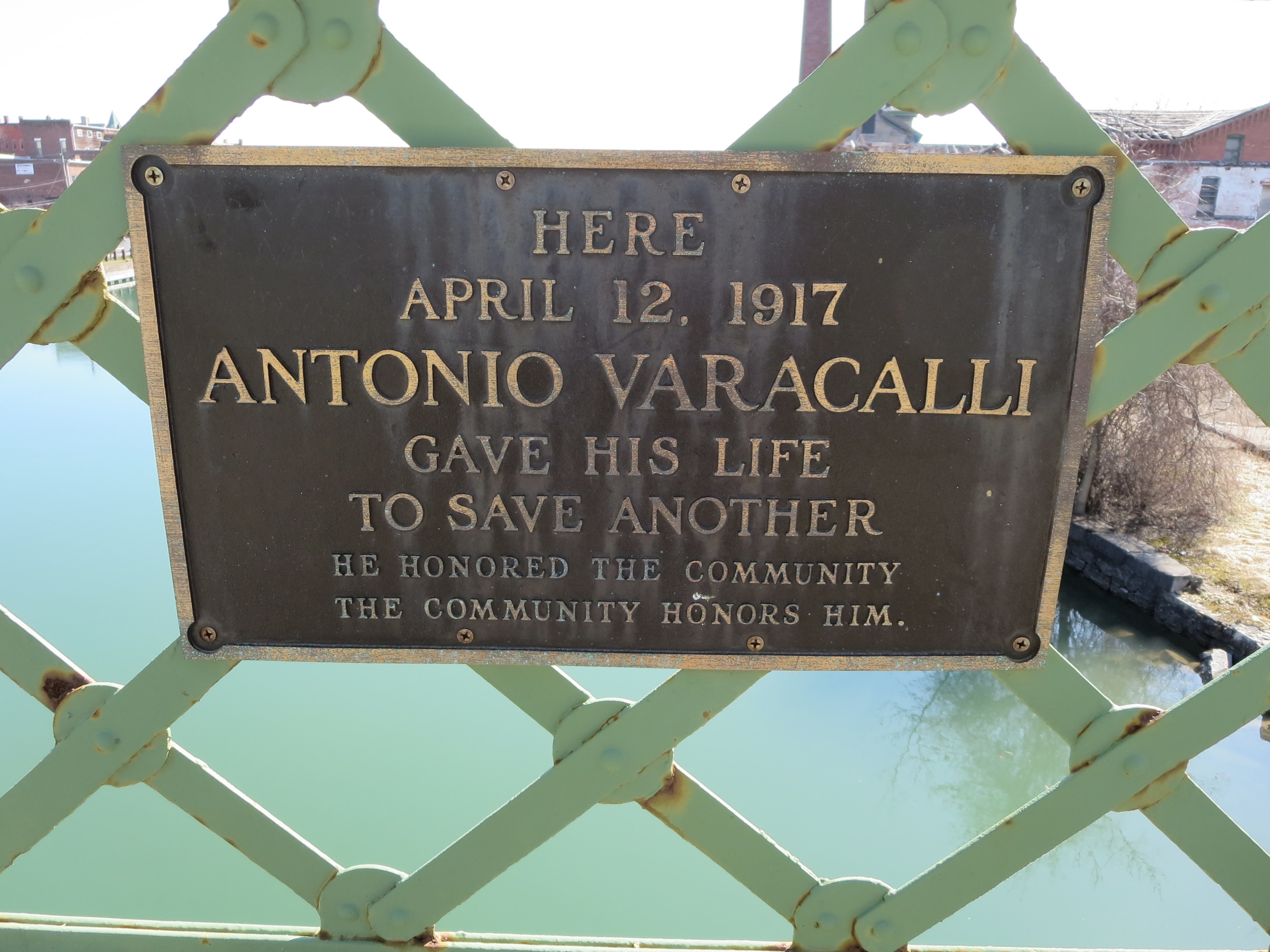 One hundred years ago in April, Antonio Varacalli gave his life while saving a woman from drowning in Seneca Falls, and the residents of this upstate New York town have not forgotten him.  Nor are they likely to:  A bronze plaque placed at the site of Varacalli’s death pledges:  “He honored the community.  The community honors him.”

In recent years, the community has observed “Antonio Varacalli Day” in the springtime not only to recall Varacalli’s heroic act, for which he was awarded the Carnegie Medal, but to celebrate its contemporary heroes.  This year the 2017 event marked the centennial anniversary of Varacalli’s death and included giving awards to community “angels,” whose outstanding service embodied his spirit.  Students wrote essays on heroes, bells were rung, local history was recited, and songs from the 1917 era were sung.

We heartily commend you for your efforts in both honoring Antonio Varacalli’s heroic act and nurturing the spirit that prompted it.   It is fitting that on the 100th anniversary of what could have been an obscure footnote in your local history you have chosen to attach to it a broader significance, that of stressing altruistic behavior.  The concept, already represented by the selflessness of others in your community, is a hallmark of any civilized society.

Not all of us will be called to face extreme danger in our efforts to help others—as Antonio Varacalli did—but each of us has the moral imperative to give of ourselves to help or guide others, and opportunities to do so present themselves daily.  Recognizing that is indicative of the strength of your community, and we salute you for it.  Please accept our congratulations and every best wish for the success of your endeavors, on Antonio Varacalli Day and always.

Varacalli, 20, an Italian immigrant, was living in Seneca Falls and on the morning of April 12, 1917, was laboring on the bank of the Cayuga and Seneca Barge Canal when a despondent young woman dropped from the nearby “Bridge Street Bridge” into the canal.  Varacalli waded and swam to her and then towed her toward the bank, shoving her to another man who had waded out.  That man took the victim to safety, but Varacalli sank and drowned.  The woman was unconscious but was revived.

It’s said that in 1945, Hollywood director Frank Capra, himself an Italian immigrant, stopped in Seneca Falls for a haircut while in the area visiting relatives.  A year later, his classic holiday film, It’s a Wonderful Life, was released.  The movie’s pivotal scene is the rescue of a man who jumps from a steel-truss bridge in a fictional upstate New York town called Bedford Falls.  The man who jumps is an angel named Clarence who had been dispatched to look over the story’s main character, George Bailey, played by Jimmy Stewart.  Despondent himself, Bailey had been on the bridge contemplating suicide when Clarence intervened, and Bailey jumps into the water to save him, thereby commencing his redemption.

In addition to the Varacalli rescue, other similarities—from architecture to street and family names—have the people of Seneca Falls believing that their town influenced Capra in the making of his film.  Each December they hold an “It’s a Wonderful Life” celebration of the town’s connections to the beloved Christmas classic film.

15:13 calls to mind those in the Hero Fund’s 113-year history whose lives were sacrificed in the performance of their heroic acts.  The name identifies the chapter and verse of the Gospel of John that appears on every medal:  “Greater love hath no man than this, that a man lay down his life for his friends.”  Of the 9,934 medal awardees to date, 2,026, or 20% of the total, were recognized posthumously.  They are not forgotten.