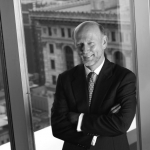 The Carnegie Hero Fund works across a broad geography, recognizing heroic acts in the United States and Canada, and collaborating with Carnegie hero funds in Europe. Yet, like its founder Andrew Carnegie, the Hero Fund has it roots deep in the Pittsburgh community.

You will not be surprised to learn that the staff and members of the Hero Fund were deeply shaken and saddened by the attacks on the Tree of Life Congregation in Pittsburgh’s Squirrel Hill neighborhood.

Many of the victims were people we knew and worked with, and all of them were part of our shared community. The attack on them was an attack on all of us. The bullets that shattered their bodies, broke our hearts.

This terrible event intersects with the work of the Hero Fund at many levels.  The first is personal. As I say, many of us knew one or more of the victims personally, and Tree of Life.

Historically and today, many members of the Hero Fund Commission have lived in Squirrel Hill. My wife Lisa and I raised our children just four blocks from the synagogue, and generations of her family have lived in the immediate neighborhood. Generations of my family are buried in a cemetery equally close by.

While Squirrel Hill is Pittsburgh’s main Jewish neighborhood, the city’s non-Jewish leadership tends to live in the neighborhood as well. House-by-house, block-by-block, we live our lives together as neighbors, friends, and civic partners.  What happens to any of us affects all of us.

At another level, the attack was a philosophical affront to the ideals Andrew Carnegie was promoting when he created his Hero Fund. As I have written in these pages before, at the heart of heroism lies the rescuer’s recognition of a common humanity shared with the victim in peril.

The Tree of Life shooting was a hideous repudiation of this common humanity. The attacker denied the common bond of humanity he shared with his victims, whether he liked it or not. This man was the anti-hero if anyone ever was. What a tragic contrast with his fellow citizens who have won the Carnegie Hero Medal.

At the practical level, our work goes on. I am pleased that one of our members will serve on a committee that will coordinate relief efforts for those involved in the attack. She is a wonderful person of great heart and wisdom, and we are proud that she will be participating in this important work.

The Hero Fund itself will monitor the investigation of the attack, just as it does for all similar events, to identify potential Carnegie Hero Medal candidates. Clearly some remarkable people did remarkable things in the response to the attacks, and it is possible (but not certain) that we might develop a case.

Mass shootings are often complex and confusing events, and it can be difficult to develop proof of acts that meet our criteria for the Carnegie Medal.

But, we have an established procedure to follow that has led to awards in other such cases. We will wait patiently for the results of the investigation, then do our job and apply our criteria as always.